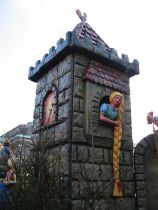 Yesterday my editor offered me the chance to do a really cool interview, the subject of which is a household name–not just here in Fort Wayne, but all over the country. She chose ME to handle this rare opportunity, and I could barely contain my excitement.

Then I heard the catch. The interview had to take place on a certain date at a certain time–a day when scheduled to be out of town for my “real” job. I was going to have to turn it down. Crushed, I was ready to admit defeat and let someone else have the chance. My fingers hovered over my keyboard, reluctant to compose my email regrets.

In a last-ditch effort, my fingers operated independently of my brain. They started typing alternatives into the body of the email. I couldn’t make the specified time, but I could do a different time. Or a different day. I could even do a phone interview from my out-of-town destination. I harbored little hope, but I had to at least try.

You know what? It worked! My editor called this guy’s publicist and everyone agreed to let me handle the interview by phone. When my editor’s confirmation dropped into my inbox, I was certain it would say Sorry, nice try when it instead it brought an Oh yeah, baby! (Okay, those were my words, but it might as well have said that, given my level of excitement.)

I am so thankful I didn’t quietly accept defeat, that somehow my mind worked quickly enough to offer alternatives. Though I had no idea whether they would be viable, simply asking the questions and posing potential solutions opened the door of possibility. If I had politely declined the interview offer, that would have been the end of the story and neither of us would have thought anything more about it. The editor would have moved on and found someone else, and I would have chalked it up to bum luck. Instead, I took a chance and threw out a few ideas. Couldn’t hurt, I thought.

It’s true. Thinking back, I realize how many times I’ve gotten a chance–or a second chance–because I made suggestions. Even when the person on the other end didn’t land on one of my suggestions, simply offering them has let him see that there may be other ways to solve the issue, leading him to consider other possibilities, sometimes changing the expected outcome.

Be like Rapunzel. When opportunity knocks and you can’t answer the door, let your hair down.

3 thoughts on “Let your hair down”