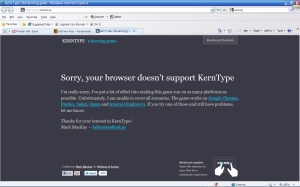 Yesterday I posted about an error message I received on a kerning site. The fact that I received the error itself didn’t bother me; the way it was communicated was the reason I took issue with it. In the interest of providing constructive criticism rather than simply whining through my blog, I forwarded the post to the site’s creator. Somewhat to my surprise, he responded.

Rather than succumbing to my *cough* infinite wisdom, however, the page creator told me (in so many words) that if I were truly interested in helping, I would have suggested an alternative message. You know what? He was right. Miss-Know-It-All-Communicator got a little too big for her britches on this one.

I quickly recovered from my chagrin and sent a reply. I acknowledged his point and proposed an alternative message–which he subsequently used to replace the version I had found offensive. He didn’t have to do that, but I’m glad he did. He incorporated user feedback into his interactive experience to make it (in my opinion) better. And not only did he take my suggestion, but he also improved upon it by adding links to download compatible browsers.

Thanks, Mark, for a happy ending to this story. I appreciated your willingness to listen, the dialog, and the dose of humility you handed me.

P.S. If you’re interested in trying the kerning exercise, you can find it at http://type.method.ac/. If you don’t even know what kerning is, click here.

2 thoughts on “A happy ending”