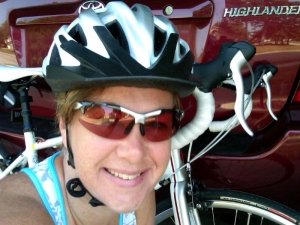 Since I started biking with minor seriousness a couple of years ago, I’ve really learned a lot. For the most part, I ride on quiet country roads with little traffic, but I still have to be vigilant. Where and how I position myself on the road makes a big difference in my ride. When I first took to the streets, I tended to hug the edge of the pavement. I thought that it would be safer for me and less disruptive/frustrating to motorized traffic. That turned out to be unwise.

Scrunching myself into a tiny track on the far right side of the lane presents a lot of problems. First, there’s a lot of junk over there, an amalgamation of road trip detritus that often consists of loose gravel, bits of glass, rotting animal parts, and general trash. I’ve even seen an open box cutter. Also, the pavement on the side is often pocked and crumbling, particularly in the country. Any of these things could pop a tire and send me spinning into traffic.

Besides that, when I’m way off to the side, people either don’t see me as well or they don’t think they need to move out of the lane to pass me. While giving a biker a few extra inches without slowing the speed may feel perfectly safe in a car, let me tell you, it’s pretty scary on a bike. I’ve had people speed past me in the same lane while they’re doing 50+ miles per hour. They were so close I could have reached out and touched the car.

Finally, hugging the edge severely limits my ability to maneuver. When it’s time to make a left-hand turn, for example, I often get stuck waiting for traffic behind me to pass, since turning left from a right-hand position is fraught with foolish danger. I’ve learned that when I’m approaching a left turn, I need to move to the left side of the lane, wait for the oncoming traffic to pass (not the following traffic), and then complete the turn. This sounds pretty simple, but try it sometime on a bike and you’ll see what I mean.

So here’s what I’ve learned, and like yesterday’s softball analogy, these lessons can be applied to many life situations:

Of course, these lessons are useless if I don’t follow the traffic rules of the road, too. I have to be respectful of others in order to have the credibility to take my place in the lane.