As a side gig, I write articles for a local magazine. As much as I enjoy it, it’s like exercise: the hardest part is getting started. I’ll sometimes spend hours–yes, hours–agonizing over the title. The computer screen never looks blanker than when I stare at it waiting for inspiration.

It isn’t that I don’t know what the article will be about. By the time I sit down to write, I’ve already done my research, interviewed the subject, and loosely outlined the content. Piece of cake, right?

Wrong-o, at least in my case.

Even if I know all the pieces and roughly how they’ll fit together, I still need a hook. I need to nail the title and the subhead because that’s what sets up everything else for me. When I serve up a wimpy title, the article that follows fights hard for its rightful place in mediocrity. But when I create a strong lead, it becomes my jumping off point for what comes next. That’s why I’ll spend hours looking at a blank screen while I turn over possibilities in my mind. I have to start strong.

Life’s like that. I need to pick a direction, set a goal so I can take off. I need to know where to go so I can get there. For a long time, I simply followed “the” formula: go to college, get a job, work hard, get married, start a family, keep working hard, hopefully get somewhere. But where? It isn’t enough to just work; you need to work toward something. If you don’t pick your own goal, you’ll just follow the tide of your circumstances. You’ll likely end up somewhere far from where you had imagined yourself or simply adrift.

As I write, occasionally I find that the title I’ve chosen has taken me in the wrong direction. Maybe I’ve uncovered information and nuances along the way that I hadn’t considered. Maybe I stumble on a better story. Maybe I didn’t fully understand my subject at first. Maybe I just got it wrong.

You know what I do then? I change the title and set off on a new path. It’s never too late.

If you don’t know where you’re going, you’ll end up someplace else.

My ex used a lot of aphorisms. (I could have written “sayings,” but I thought “aphorisms” would make me sound smarter.) Although I’ve tried to forget many of them, one will sometimes pop into my head when the situation is right.

Scurrying to work this morning, I was putting increasing pressure on my gas pedal when I heard a voice in my head say, Your car is not a time machine. Doggone it. I wish I didn’t have to attribute occasional snippets of wisdom to my ex.

He’s right, you know. My car can’t make up for the extra time I spent checking my email or the five extra minutes I lay in my bed in a fugue state refusing to get up. It won’t compensate for all the stuff I decided to do instead of getting on the road when I had planned. A car is a car. It moves me from place to place; it’s not a vehicle to make up for past sins.

Whether it’s a car or some other object, process, or person, I think we all have a tendency to expect more than something is designed to do when we fall short elsewhere. We lean on it to correct or save a situation, when really we just need to own up to our actions.

Which, of course, leads me to another aphorism the ex liked to use: a lack of planning on your part doesn’t constitute an emergency on my part.

I traveled to New Jersey last week to recoup a training session I had missed in early June. It was a one-on-one session, so we flew through the material and wrapped up by 2:30 in the afternoon. Since my return flight wasn’t scheduled to leave until the next morning, I found myself staring at free time–and the NYC skyline.

Faster than you can say “Big Apple,” I jumped on a train bound for Penn Station, giddy at the prospect of spending not just any evening, but Friday evening, in Manhattan. I had nothing but time, bustling sidewalks, and city lights stretching in front of me.

Somewhere in the getting-there process, I had the fleeting thought that I should have a plan–not a rigid plan, but at least some vague idea of what I wanted to do and see. Quickly dismissed by my urgent need to GO, I found myself on the sidewalk in front of Madison Square Garden faced with endless possibilities. Quite literally, I didn’t know which way to turn.

My foodie self decided to head to Chelsea Market to poke around the food and cooking shops. (Secretly, I also hoped some famous chef would stumble out of the Food Network studios located on the building’s upper floors.) I pointed my feet south and started walking. 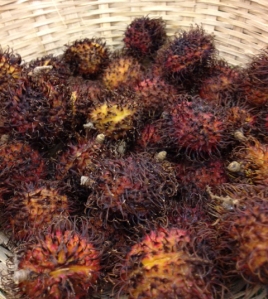 I spent more than an hour in Chelsea Market just taking it all in. I loved smelling the freshly baked bread and handling exotic produce. I was delighted to find a few fruits I couldn’t name. I even texted my brother that I thought I would die from joy.

Then I came to the end of the market–and the end of my so-called plan. I still had five glorious hours left to spend in the city, but the sheer number of possibilities shut down my brain. So I turned my feet south and headed farther downtown, with no clear idea of where I was going.

I rambled through Greenwich Village and poked around Soho. I eventually ate dinner and wandered back to midtown and up the Empire State Building. Mostly, though, I just walked. For all those hours, I walked. Without a destination. And while I loved soaking up the sights and sounds and smells of the city, eventually it began to wear on me a little. I couldn’t help thinking that if I had added just a couple more destinations to my dance card, I might have had a little richer experience. I didn’t need a tight schedule, but a couple of anchor points wouldn’t have hurt.

They would have transformed wandering aimlessly to walking with purpose.