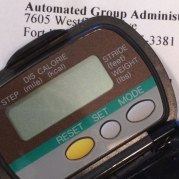 Several years ago, I participated in some company focus groups that were designed to test a new insurance concept. The premise we worked from was that people who exhibited certain behaviors would have to pay more for health insurance. As an average sized, non-smoking employee, I didn’t readily fall into the group of “The Punished”, but the concept nonetheless felt uncomfortable to me. Apparently others shared that opinion, because the idea never matured into reality.

Fast forward a dozen or so years.

In a conversation earlier this week, a colleague told me about a program in which his daughter-in-law participated at work. Clearly intrigued with the idea, this colleague told me that his DIL’s employer had issued her a precision pedometer to measure her daily step activity. Periodically, she would plug it in to her computer and upload the data to the company system. As long as she maintained a certain average, she qualified for a discount on her health insurance rate. Best of all, he said, it was completely voluntary.

I found myself nodding along, liking the idea of a discount. That could work, I thought to myself. I’d certainly do what I could for a discount.

As I thought about this scenario later, I realized that it was exactly the same idea I had shunned years before. The only difference was the language.