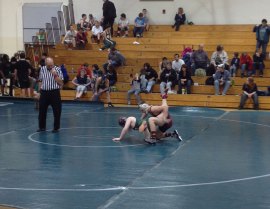 Sometimes I find great customer service experiences in the most unexpected places. Yesterday I took my son to wrestling camp at a high school about an hour’s drive from home. It’s an overnight camp, so the check-in process was more involved than a typical drop-and-run.

As soon as we walked into the school, a student assistant immediately greeted us and led my son to his assigned locker room. Another directed me to the check-in area, where we found a series of tables laid out in progressive order. The first table was check-in/registration, the one behind it was medical check-in, and behind that were menus and team assignments, respectively. Because of the layout (one behind the other), movement was intuitive and people couldn’t inadvertently wander to the wrong table.

Everyone had to start at the registration table before moving on, and none other than the coach himself handled the check-in. He personally manned that table so he could introduce himself to every parent, sibling, and hanger-on who brought a kid to camp. And he didn’t just stand there shaking hands; he was THE guy, the only guy.

Not just as a parent, but also as a customer, I thought this was a brilliant move. In that masterful positioning of tables and bodies, he invested himself personally in that camp. He recognized that his “customers” were more than just the kids taking part; they were also the parents who entrusted their mini macho men to his care. He got involved, and his actions spoke volumes.

As long as my kid wants to keep going to that camp, he’s got my blessing. Brands are personal; what a powerful object lesson.