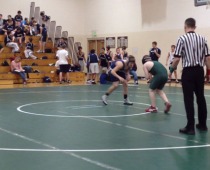 My son started wrestling this year for his middle school. It has been fun watching him grapple with the nuance of this sport, even though I wouldn’t have chosen it for him. What I’ve enjoyed most, however, is the maturity he continues to demonstrate as he learns and grows.

His devotion, not just to the sport itself but to his own betterment in it, has taken me a bit by surprise. As someone who has struggled to find his niche, exploring one interest after another without settling firmly into a particular pastime, this kid now makes arrangements with his teammates to work out at the Y on no-school days. He makes better food choices in order to not only make weight, but also to achieve peak performance. He runs extra sprints at practice. He looks for other wrestling opportunities to occupy him during the offseason. All of a sudden he lives and breathes this stuff.

One example of Jake’s commitment to this endeavor impresses me more than any other. He has asked me to record video of his matches so that he can watch and learn. He’s serious about it, too. In fact, the losses interest him more than the wins, because he can review his mistakes and plan for the next match. At a time when many of us would turn our heads to avoid the unpleasantness, he looks it squarely in the face and learns from it.

Thanks, Jake, for reminding me that we don’t learn nearly as much from the wins as from the losses. And bravo to you for making the most of this learning opportunity.