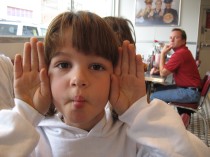 Last night I had to run a few errands, so I stopped at the pharmacy to refill a prescription and pick up a few odds and ends. I went inside to the prescription counter, which I found to be abuzz with activity. Two pharmacists and three techs rushed about, frenetically serving the drive-thru window, in-store customers, and telephone inquiries. I had obviously arrived at a peak service moment.

While I waited in line, I found myself absently watching the pharmacist at the drive-thru window, and something made me tune into what he was saying. In a huff, he shook his head and muttered–though not particularly quietly–“Pain in the a**.” Then he stalked off to fill the next prescription, shaking and rattling alphabetically filed bags of meds as if they were violating his space. Now nonplussed, I focused my attention elsewhere.

At the same time and in an odd juxtaposition, the tech serving the woman in line in front of me was bending over backward to help solve a problem. The woman insisted that a prescription had been called in (she heard the nurse do it herself), but the pharmacy had no record of it. The woman was emphatic, and when it became clear that the prescription really wasn’t there, her voice rose an octave and I could see the creeping tendrils of panic start to curl around her face. “But she had surgery. Now there’s no one at the doctor’s office and she has to have her meds. What should I doooo?”

The tech looked everywhere she could think for the prescription, checked the computer, and asked her colleagues. Nothing. Then her face brightened and she suggested that perhaps the doctor’s office called it into the competing pharmacy across the street. Then she did an amazing thing. Rather than sending the woman on her way to check for herself, the tech picked up the phone and called the other pharmacy. Sure enough, the meds were waiting there.

Although neither scenario seemed out of the ordinary, watching each unfold simultaneously really left a strong impression on me. I learned two lessons from this visit. First, you have the power to determine the outcome of almost any situation. Although the customers involved behaved similarly, each situation took a markedly different turn based on the attitude (and corresponding behavior) of the respective employees. Second, you never know who is watching. If I noticed, other customers probably did, too. It never hurts to be on your best behavior.