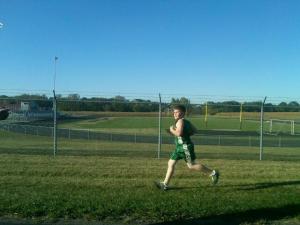 I’ve spent the last month of Wednesdays and Saturdays cheering at middle school cross-country meets. Following “parent protocol,” I dash from the start line to the mid-point of the race and then to the finish line to see my kid as in many places as possible. I love it; I even get choked up when the first kids enter the chute–no matter which team jersey they’re wearing.

Which individuals win races and which teams are strongest generally become clear early in the season. Race after race, the same kids always finish at the top. The fast kids take home the hardware and all the rest bring up the rear; there are rarely any big surprises in running. After all, only one person wins a race.

My competitive self–the person whose legs twitch when the starter’s pistol cracks–once bought into that thinking wholeheartedly. Meet after meet, as I watch the first kid and then the next 100 cross the finish line, I realize that this perspective is not only incorrect, it’s also disrespectful.

Without question, the first kid across the line deserves the medal. Whoever she is, she has harnessed her natural talent through hard work and perseverance to beat everyone else to the chute. In fact, she generally makes it look easy. But what about the kids who cross the line and fall down? Or throw up? Or are so spent they can’t even say their names? What about the kids who run with pulled muscles? The kids who can’t make it unless they stop and walk a few feet? What about the kid, known in every race as “Last Runner,” who knows there is no one behind her and sticks it out anyway? Every one of these kids runs her heart out. Every one of them shows guts. Every one of them knows what commitment means. These kids know they’ll never win, but they run all out anyway.

So think about it. Who really won?