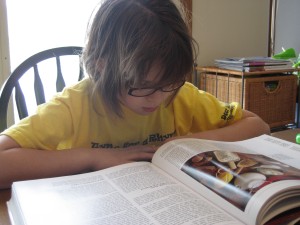 Earlier this week, my hates-to-ask-for-help fifth grader came to me with her math book. As much as it pained her to admit (wonder where she gets that), she was struggling to understand her current unit. She’s a sharp kid, so I knew that once she fully understood the concept at hand, she’d take right off. The key was finding the right explanation to unlock it for her. Given my passion for finding the right words, this should have been right up my alley.

The task at hand was solving for variables in algebraic equations. 2x+4=10 kind of stuff. Overall, not too tough. Imagine my surprise when all of my logical explanations were met with frustration and indignance. She just didn’t get it, and I wasn’t helping. My own frustration level grew right alongside hers.

Finally I realized that I just wasn’t speaking a language she understood. Doing the opposite operation, isolating the variable, and even “move it all to the other side” meant nothing to her. I quickly gained a heap of respect for her teacher, who has to navigate her way through teaching algebra to elementary schoolers by creating a new language. The otherwise common terms in the field just don’t work for kids that age.

Through trial and error, we both figured it out–I the language and she the homework. Once the equal sign became a balance, she understood that in order for the problem to stay in balance–or for the scale to stay even–anything we did on one side, we had to do on the other. Then it became simply a matter of moving pieces around until the x was all by itself. Whew!

It’s funny how lessons in communicating can come from any direction. With as much thought as I’ve given to speaking the other person’s language, I’m still amazed at the times when it takes me by surprise, particularly when it happens at home.