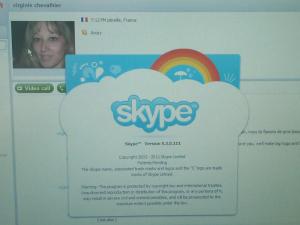 Today I Skyped with my cousin and uncle in France. They don’t speak English, and I don’t speak French, yet we enjoyed a video call that lasted the better part of an hour. How did that work?

Mostly, we used a plug-in translator (Clownfish) to send instant messages back and forth. We would write in our respective native languages, and Clownfish would translate instantly via Skype. That’s a pretty cool feature, but we don’t need video or audio functionality just to send instant messages. Somehow, though, it wouldn’t have been the same without the visual aspect. The video call made our connection seem more real. We could see each other’s reactions to the written words. We could experience a tiny bit of our respective worlds by peeking at each other in situ–they in their house in the French countryside and I on my suburban back patio. We could hear the tenor and pitch of our voices, even if we couldn’t understand the words.

This is truly a fascinating concept to me. While we had an actual discussion by typing messages back and forth, the “real” conversation didn’t come from the words. It was the visual connection that made, well, the connection.

I have already jumped from this springboard into several different thought pools. I’m pondering the doors opened by this discovery of family, the wonders of electronic communication, the resourcefulness we use when we can’t use common verbal language to communicate. Most of all, I am relishing the thought that maybe this is a case where the words don’t matter. It was the picture that was worth…well, you know.

One thought on “Worth a thousand words”